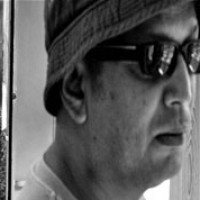 "The album was recorded more by "one thing leading to another" rather than a focused idea of doing an album. Ashish made a video and we figured it would be a good idea to put a bunch of our tunes together as an album to support the vid. We spent two days in a studio recording about 9 tracks. From these we culled the collection for the album.
I will not go into descriptions of the songs as I'd rather let the listener decide what they perceive. One thing we tried to do as HFT was to always try and chart a different route with each tune, almost as if each tune could spark an album of that kind. I don't know how far we've succeeded in that , as playing the tunes over these last few years we've changed the tunes have changed and when we play them again they will be different."