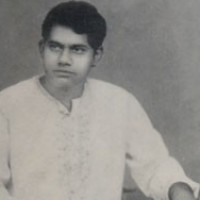 Son and disciple of Azeem Baksh Khan pf Jaora, Nizamuddin Khan was born in 1927. Nizamuddin Khan's father had served at the princely courts of Rampur, Rewa, and Jaora before joining the court of the Nizam of Hyderabad. Nizamuddin Khan also learnt from his maternal grandfather Jeenu Khan of Muzaffar Nagar, and his paternal cousin Faraz Hussein of Nagpur. He was known for his solo presentations and his accompaniment to vocal and instrumental music. In particular, he is remembered for his accompaniment to vocal forms like thumri, dadra, chaiti, kajri, and related forms. He died in 2000.