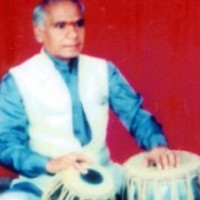 Born in 1931 at Indore, Mahadev Indorekar had his initial training in tabla from his father Narayanrao Indorekar (1907-1989). Narayanrao had trained under Maula Baksh Khan of Indore. Mahadev Indorekar received advanced training from Jehangir Khan in Indore and Gami Khan in Mumbai. His father had also learnt from these maestros. At the early age of 12, Mahadev Indorekar presented a tabla solo recital at the Amateurs Artist Academy, Mumbai. He went on to accompany several leading artistes and performed for many commercial recordings. In 1953, he was part of a 29-artiste Indian cultural delegation to China where he accompanied vocal and instrumental music and Kathak. After spending some years playing for the Hindi film industry, Mahadev Indorekar took up position as staff artiste on the All India Radio (Akashvani). As an ‘A’ grade artiste he accompanied many vocalists and instrumentalists on local and national programmes and also presented solo recitals. He remained a staff artiste until 1990.