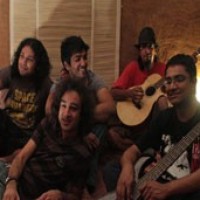 Formed in 2005, Half Step Down began gigging in 2006 as essentially a rock ‘n’ roll band, though it would be more accurate to acknowledge their sound as a mish-mash incorporating elements of the blues, alt-rock, funk, and reggae. Consciously refusing to let themselves be fenced in by genres, they derive their sound from influences and inspirations ranging from Led Zeppelin, RHCP, and Dave Matthews to Rachmaninoff, Marley, and Django Reinhardt. In early 2007 the band made it to GIR with their track Overture to Outerspace, which subsequently launched them on a much vaster platform. They spent most of the following year touring the country, taking time out in June to appear on Channel [V]’s show Launch Pad. They wrapped ‘07 with a highly acclaimed unplugged performance in their city, Delhi, where their cover of Redemption Song stood out as one of the critics’ finest of the evening. The nomenclature of the band is derived from the fact that the band tune their guitars a step down from standard tuning. Half Step Down band members: Dhaval Mudgal- Vocals Carl Abraham- Bass guitar Shiv Lumba- Piano/Organ Srijan Mahajan- Drums Karan Dutta - Guitars and backing vocals

Knocking At The Back Of My Head