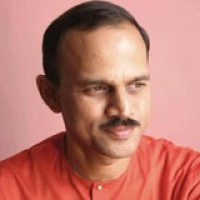 With his father and brother playing the harmonium, it was almost natural that Dr. Arawind Thatte taught himself the harmonium in his childhood. He also learnt tabla from G.L. Samant and studied vocal music at the Bharat Gayan Samaj in Pune. He received guidance from Suhas Datar and Sudhir Datar and later received vocal training from Pandit Jasraj between the years 1981 and 1996. Over the years, Dr. Thatte has accompanied a host of vocalists, who presented various styles and forms. He also provided harmonium accompaniment to Marathi non-film popular music and played the organ with Marathi Sangeet Natak. A widely traveled musician, Dr. Thatte has performed in several concerts in India and overseas. Dr. Thatte has experimented with the potential of the instrument and has sought to create a separate identity for himself as a harmonium soloist and accompanist. He has many recordings to his credit, including some that feature him as a soloist. He is a regular performer on the Indian radio and television networks. His awards include: First prize in the All India Radio competition (1982) Kumar Gandharva Puraskar from Shri Ram Pujari Pratisthan, Solapur (1993) Bandubhaiyya Chaugule Sanman from Indore (2002)

Sangeet Vimarsha: A Bouquet of Thoughts About The North Indian Classical Music