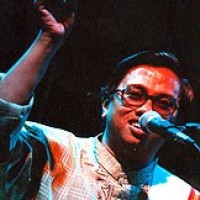 From the ghaats of Benaras

SAMPLE TRACK:
From the ghaats of Benaras

Born on April 26, 1964 in a music loving family of Varanasi, Devashish Dey received his initial training from Pashupati Nath Mishra, a stalwart of the Banaras Gharana of vocalists. He later underwent rigorous training from the erudite vocalist Mukund V. Kalvint who was himself a disciple of both S.N.Ratanjankar of the Agra Gharana and Rajabhaiya Puchwale of the Gwalior Gharana. Devashish Dey has assimilated influences from these three leading gharanas to develop a harmonious style of his own. A graduate of the Benaras Hindu University with a B.Sc. (Hons) degree in Physics, Devashish Dey was also awarded the degree of "Sangeet Praveen" by the Prayag Sangeet Samiti. He is also an "A" grade performer of both All India Radio and Doordarshan. A popular exponent of both khayal and thumri, Devashish Dey also has a rich repertoire of tappa, kajri, chaiti, jhoola and bhajan. His book of compositions titled "Swatah-Sfurt Swarachit" highlights his skill as a composer.

A collection of khayal, tar ...

From the ghaats of Benaras