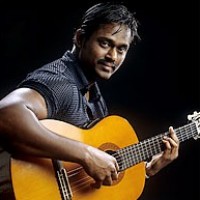 Chris Powell is a drummer with multifarious interests and skills. Associated earlier as drummer with the rock band Euphoria, he also took to composing and arranging music. His work includes performing in live concerts and for studio sessions. He has performed at prestigious events in India and abroad. He is equally known for his work as a sound engineer. In his album Namastasyai, he plays the roles of composer and performer.