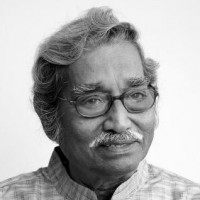 Late Pt. Arvind Mulgaonkar was classed amongst the most renowned contemporary tabla maestros. He had piously preserved the traditional elegance of tabla repertoire. Pandit Mulgaonkar(1937-2018), had not only devoted his life to learning, mastering and preserving this treasure of rare tabla compositions but had also handed it down most generously to the next generation.  Arvind Mulgaonkar began his initial training in tabla under Late Babalal Islampurkar. Then he became a disciple of Amir Hussain Khan, doyen of Farrukhabad Gharana, and took advanced training for 14 years till Khansaheb’s death. Later he was trained under Ahmedjan Thirakhawa  for 3 years and Ata Hussain Khan of Rampur for 3 years.     He had participated in a number of Music Conferences giving solo recitals and accompaniment to eminent artistes all over the country and had also given a number of lecture demonstrations throughout India and abroad. He also imparted advanced training to a number of students on the basis of "Guru Shishya parampara" for about forty three years and was bestowed with many awards, including:       ·         State Award from the Govt. of Maharashtra in 1992 for excellence in instrumental           music. ·         Award of Senior Fellowship from Govt. of India, Dept. of Culture for 1995 / 1996. ·         ‘Swara Sadhana Ratna’ award from Swar Sadhana Samiti, Mumbai on 8th March 2003. ·         ITC Sangeet Research Academy Award, 2006 for his lifelong and dedicated services to Indian classical music on 5th January,2007. ·         Iyer Foundation, Mumbai, Award, 2007 for his lifetime achievement in music on 10th March,2007. ·         Late Mrs.Vasundhara Pandit Memorial Award, 2007 for his immense contribution to Indian classical music on 26th July, 2007. He was the founder member of the “Bandish Tabla Art Promotion Trust” dedicated to tabla maestro Late Amir Hussain Khan, established in 1994 for the promotion of the Art of Tabla.