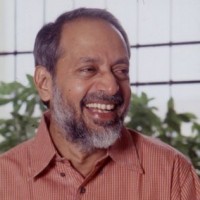 Arun Khopkar is an alumnus of the Film and Television Institute of India. After getting his diploma in 1974, he has been working as a filmmaker, film scholar and film teacher. Many of his films on art forms like music, dance, painting, architecture and literature have won national and international awards, including the Golden Lotus, the highest national award in India, which he has won three times. His feature film, an adaptation of a Nikolai Gogol’s short story was shown in Moscow, Sarajevo, Cairo and Beppu (Japan) film festivals.   He has taught film theory and practice at the Film and Television Institute of India, the Whistling Woods, the All-Union School for Higher Studies in Film Direction (Moscow), Jawaharlal Nehru University, Central University (Hyderabad), National School of Drama, National Film Archive and many other institutions.   His book on the Indian Film director Guru Dutt got the National Award for the best book on cinema and is soon to be published by Penguin. He is an internationally acknowledged authority on the aesthetic theories of Sergei Eisenstein. He has contributed several seminal papers on film aesthetics to various international conferences, seminars and journals.   He knows English, Hindi, Marathi, Sanskrit, French, German, Russian, Italian and Bengali and has diplomas in German, Russian, Italian and Japanese. He is widely traveled and has visited the US, UK, Germany, Switzerland, Italy, Spain, Holland, Russia, Taiwan, Japan, Hong Kong, Indonesia and Singapore.