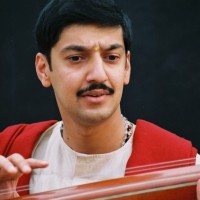 Dattatreya Velankar was born to a family of Keertanakaras. His father, Lakshmandas Velankar is a renowned Harikatha Vidwan who is acclaimed for his contribution to the art of presenting Harikatha.  Inspired by his parents, Dattatreya took up Harikatha at a tender age under the tutorship of the world famous Harikatha artiste Sant Bhadragiri Achyutadasji. He also received encouragement from Swami Jitakamanandaji at Ramakrishna Balakashrama, Mangalore, where he received his schooling. On the advice of Achyutadasji, Dattatreya sought the guidance of eminent Hindustani classical vocalist Vinayak Torvi, from whom he has been receiving taleem since 1993.