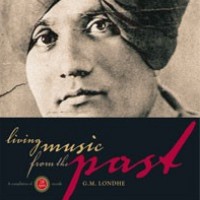 Living Music from the Past: G.M. Londhe

SAMPLE TRACK:
Living Music from the Past: G.M. Londhe

Originally from Indore, G. M. Londhe (18/7/1902-27/9/1944) lost his father at an early age. The family was faced with poverty and Londhe could not continue his school education beyond a point. He was equipped with a good voice and had undergone some musical training, but his early interest in music and theatre was provoked by the theatrical productions staged by several theater companies that visited Indore. His high-pitched and clear voice often brought him invitations to sing welcome songs at various public functions. Some members of the Kirloskar Sangeet Natak Mandali heard him on one such occasion and asked him to join the Mandali. Londhe immediately took this opportunity and left home to join the Mandali, despite opposition from his family. Starting his theatre career with the Kirloskar Sangeet Natak Mandali in 1917-18, Londhe played small and insignificant roles, graduating thereafter to playing female roles of secondary importance. The Mandali during these years was facing hard times and Londhe realized the necessity to move on to further his own interests. He therefore took up employment with Master Dinanath’s Balwant Sangeet Mandali and later with Vishwanath Sangeet Mandali. But after this short stint, he went on to join Lalitkaladarsh, the theatre company founded by Bapurao Pendharkar. By this time, he had acquired a physique that did not allow him to play female roles. Though he played secondary male roles in Lalitkaladarsh, his role as Bhargav in the play Vadhupareeksha brought him public attention. The hero’s roles in the Lalitkaladarsh productions were played by the proprietor Bapurao Pendharkar, hence, Londhe believed he would never get an opportunity to play these roles. But his growing popularity even in secondary roles, prompted Bal Gandharva, the eminent actor-singer, to invite him to join the Gandharva Natak Mandali in 1931. Once in the Gandharva Natak Mandali, Londhe succeeded Vinayakrao Patwardhan as the hero and shone as Krishna in the plays Swaymavar and Soubhadra, as Dhairyadhar in Manapman, Charudutt in Mricchakatik, Duryodhana in Draupadi. But Londhe’s popularity received further impetus when he played Satyavan in the new play Savitri, which was staged by the Gandharva Natak Mandali in 1933. He also won public acclaim as actor-singer in the plays Kanhopatra and Amritsiddhi. Londhe had studied music in the interim under Narayanshastri Tambe from Pune, and his singing was precise, clear, strong, and melodious, though was not considered to be very imaginative and virtuosic. But his personality, acting talent and strident open-throated singing, went a long way in making him a successful actor-singer. However, Londhe’s career on stage was short-lived due to the crisis that overcame Marathi theatre with the growing popularity of the modern cinema medium. Leading lights of the Marathi theatre like Bal Gandharva, Master Dinanath and Bapurao Pendharkar, tested their fortunes with this medium, but failed in their pursuit. The Gandharva Natak Mandali was closed down and Londhe began recording for gramophone labels like Odeon. He even acted in some films like Sant Kanhopatra, Sant Meerabai (stage talkie), Raja Gopichand, Bhagwa Zhenda, and Bhakta Damaji. His performances in the annual Ganeshotsav (festival in praise of Ganesh, the elephant-god) drew huge audiences, and his songs were even broadcast on radio in later years. But despite his success in the realm of gramophone recording and cinema, Londhe did not remain connected with cinema for long. Meanwhile, Bal Gandharva had soon realized that his association with cinema was not as promising as he thought it would be. Consequently, he wrote to Londhe asking him to restart the Gandharva Natak Mandali, though without the presence of Bal Gandharva, as the latter was bound by the contract he had signed with Prabhat Films (Cinema). Overcome by his attachment for the Mandali, Londhe took it upon himself to set it up afresh, and this sentiment was echoed by many of those who had been earlier attached to the Mandali. Thus, in 1935, the new incarnation of the Gandharva Natak Mandali was brought to life. Londhe continued working for the new Mandali till 1937. Convinced that theatre was his passion and favoured workplace, Londhe set up the Rajaram Sangeet Mandali at a time, when circumstances did not favor the continuance and prosperity of Marathi theatrical productions. Started in 1939, the Rajaram Sangeet Mandali went through trying times for a couple of years, but gained popularity thereafter due to Londhe’s perseverance and business acumen. In a bid to attract public attention to his Mandali, Londhe decided to invite well-known theatre persons for his productions on short stints. He had already engaged the services of Chintamanrao Kolhatkar as a Director and actor, but he also extended invitations to others like Master Dinanath, Nanasaheb Phatak, Shankarrao Sarnaik, and Ganpatrao Bodas, for special productions. Dinkar Kamanna, known for his comic roles, was also part of the Mandali, and such roles were later played by Damuanna Malwankar, a popular actor on the Marathi screen. Londhe also engaged the services of actor Vimal Patwardhan and greatly advertised her stage presence with Ganpatrao Bodas. Londhe’s production of Sanshaykallol won him huge public response in Mumbai and financial gain. Female roles were also played successfully by Master Naresh. Others who acted in plays produced by the Rajaram Sangeet Mandali included Dattopant Vaishampayan, Shivrampant Paranjpe, Bhargavram Achrekar, and female actors like Pramila Jadhav and Kesarbai Bandodkar. Londhe also requested playwright Vasant Shantaram Desai to write verses for Premsanyas, originally a prose play penned by Ram Ganesh Gadkari. This play, launched as Sangeet Premsanyas, drew plaudits. Just before his premature death in 1944, G. M. Londhe had received adulation for his performances at the Natyashatabdi Mahotsav held at Sangli in 1943 and at the Natyshatabdi Mahotsav held at Mumbai in 1944.   References V.Y. Gadgil, “Sukhad smriteenchaa kallol nirmaan karnaare natavarya Gangadharpant Londhe” in Rasrang, Divali ’94, (Marathi) Kaleche kataksha, (Marathi) Vasant Shantaram Desai, Makhmaleechaa paddaa, (Marathi) G.R. Joshi, “Gandharva Hero” in Ravivar Sakal, Pune, September 25, 1994.   Biographical note prepared by Aneesh Pradhan

Living Music from the Past: G.M. Londhe