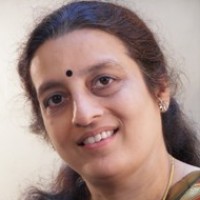 Ashwini Bhide Deshpande is a vocalist of the Jaipur-Atrauli khayal gayaki tradition. Born into a musical family, Ashwini was awarded the Sangeet Visharad degree of the Gandharva Mahavidyalaya at the age of sixteen. She won the President’s Gold Medal at the All India Radio Music Competition in 1977. After grasping the rudiments of Hindustani classical music under Narayanrao Datar, she began imbibing all the traditional aspects of the Jaipur Gayaki under the tutelage of her mother, mentor and guru Manik Bhide. Her intention to explore rare and complex (achchop) raags of her gharana, led her to seek guidance from Ratnakar Pai, a senior stalwart of the gharana. Ashwini is equally at ease with forms like thumri-dadra and bhajans/abhangs. Her repertoire extends also includes stotras/stutis. She has composed many of her bhajan presentations. Ashwini has been recorded extensively. Her debut album was released in 1985 and several more have followed thereafter under various banners. In October 2004 Ashwini published a book Ragarachananjali containing her bandishes. Ashwini has traveled extensively all over the globe participating in various prestigious music conferences and Sangeet Sammelans. A top grade artiste of Akashwani and Doordarshan, Ashwini has featured in several national programmes and AIR Sangeet Sammelans. Ashwini also devotes time to teaching young students. She has regularly participated in lecture-demonstrations in various schools, colleges and sangeet sabhas. Ashwini has received many awards and citations. Notable among these are the "Pandit Jasraj Gaurav Puraskar", the "Kumar Gandharva Samman" by the Government of Madhya Pradesh - the first female Hindustani vocalist to have been decorated with this prestigious national award. Ashwini has also been awarded a doctorate in Biochemistry by the Bhabha Atomic Research Centre, Mumbai.