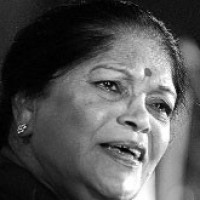 Daughter of Menakabai Shirodkar, a leading songstress-dancer of yesteryears, Shobha Gurtu (1925-2004) had an eclectic exposure to music right from her childhood. Her mother was a disciple of Bhurji Khan of the Jaipur-Atrauli gharana, and Shobha Gurtu was consequently influenced by this style. She had her training in khayal from Natthan Khan of the Jaipur-Atrauli gharana, but it was her tutelage with Ghamman Khan that had an enduring impact on her singing. Shobha Gurtu learnt thumri, dadra, kajri, chaiti and other allied forms from Ghamman Khan. She also received guidance from her father-in-law Narayannath Gurtu. Shobha Gurtu included ghazals and Marathi stage songs or Natya sangeet in her repertoire. Over time, she also lent her voice to the Hindi film industry and sang Hindi and Marathi non-film songs as well. A highly sought-after vocalist who specialized in the thumri-dadra forms, Shobha Gurtu had several Indian and overseas commercial releases to her credit. Her singing can also be found on some cross-cultural experimental recordings. She remained a favourite artiste in several music festivals held in India and abroad for many decades. She received the Padma Bhushan from the Government of India in recognition of her contribution to Hindustani music.

Songs of the Seasons Volume 2