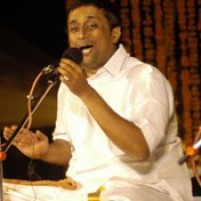 Carnatic vocalist Sanjay Subrahmanyan Sangeet was born on January 21, 1968. The former cost and chartered accountant has undergone intensive training for nearly three decades, beginning with learning the violin under V Lakshminarayana (better known as the father of the violin wizards L Vaidyanathan, L Subramaniam and L Shankar). He switched to vocal music and learnt from his grand aunt Rukmini Rajagopalan for 10 years before finding the tutelage of one of the greatest musical teachers of the late 20th century, Calcutta KS Krishnamurthy. Today, at the height of a successful career, Sanjay continues to be a student under the guidance of Nadaswaram maestro Sembanarkoil SRD Vaidyanathan. Sanjay began his concert career in 1986. He has given many concerts all over India and in 20 different countries around the globe. He has been regularly featured and honoured by premier music organisations in India and is the first Carnatic vocalist to have performed twice at the prestigious Theatre de la Ville, Paris.