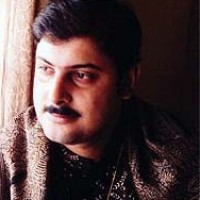 Sandip Chatterjee started his training in music at the early age of eight, when he became a disciple of the well known santoor player Tarun Bhattacharya. He also received guidance for several years from the eminent vocalist Ajay Chakraborty. Sandip Chatterjee is now a popular performer with invitations from all major music festivals in the country and overseas. His collaborative work includes appearances with the Nuokollin Jazz Orchestra. He has also performed on several film and television tracks composed by Indian music directors such as A.R.Rehman, V. Balsara and Ravindra Jain. He also has several albums to his credit such as Moment of Dawn, Mangal Dhwani, Summer Rain, Shanti and Shringar.