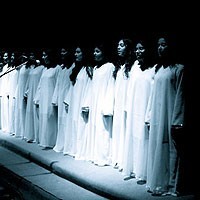 Artistes Unlimited is a platform for the promotion of the performing arts – with music at its core. Built on the ethos of collaborative and not competitive action, since its inception in 2003, Artistes Unlimited has featured over 200 artistes. The collaborative spirit is evident not only in its numbers but also in its music – a seamless musical repertoire that spans Indian, Western and World Music. From independent concerts that have featured an 88 strong vocal ensemble ('SoulScape' - 2003 ), an original AU musical ('En Route' - 2005) to a 3-day AU music festival featuring Shubha Mudgal, Parikrama and Them Clones ('Odyssey' – 2004), to AU’s first 3-city tour (AU En Route - Mumbai, Bangalore, Delhi – 2007), AU has delivered its music in several productions.